Botswana International University of Science and Technology (BIUST), which opened its doors to the first crop of students in August 2012, is looking for a vice chancellor.

According to the university website, the institution which offers programmes in Science, Engineering and Technology, announced that it is looking for a candidate who shall direct, manage and promote the strategic development of the university as an internationally recognised teaching and research institution.

The candidate will also be expected to ensure that the university serves as a catalyst for innovation and economic development. The ideal candidate is expected to have a doctorate qualification and a full professorship in science, engineering and technology or related fields. In addition, the candidate should be in possession of outstanding academic or professional employment record with a minimum of 12 years experience in teaching and research and significant experience in research, administration, and fund raising.

The position of vice chancellor fell vacant after the abrupt resignation of distinguished Professor Hillary Inyang. Professor Inyang cited political and external interference and micro-management of the university as the main reasons behind his resignation. He also expressed his deep concern about the security of foreign staff at the institution and accused other staff members of peddling unfounded allegations about his administration. In defence of BIUST and her ministry, Education and Skills Development Minister, Dr Unity Dow told parliament last year that Professor Inyang’s resignation was influenced by his unlawful conduct as some of the non-citizens were brought into the country for employment at BIUST without following procedures and indeed the applicable laws governing engagements of non-citizens.  According to Dr Dow, under the administration of Professor Inyang, these non-citizens worked without the necessary permits and were employed and paid outside the BIUST Council approved organizational structures.

BIUST was established by an Act of Parliament in December 2005. As originally conceived, it was to become a ‘world-class university’ employing public-private partnership and with strong links to programmes of excellence elsewhere in the world. Since its establishment, the university management has been rocked by instability. Former council chairman, Serwalo Tumelo was unceremoniously kicked out with Boyce Sebetela being roped in as acting council chairman. Former Mahalapye West legislator, Bernard Bolele, was later appointed council chairman. Currently, within the university management, there is no substantive director of communications and public affairs, deputy vice chancellor, research and innovation, finance and administration. 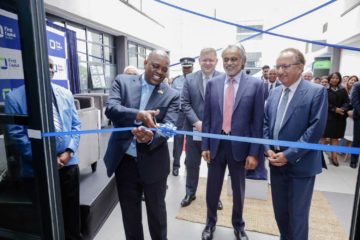