To an untrained observer, karate skills can seem like magical super powers. In movies we see karate masters taking down opponents in a matter of seconds prevailing with a few elegant punches and kicks. Karate is a highly complex art that takes many years to master but the root of Karate is fairly straight forward by applying physical, mental and spiritual force intelligently and precisely. However, our very own karate kid, Khaya Groth has proved to be among the best super kickers with sheer strength and raw techniques.

The 16- year -old has proven to be a dedicated and hardworking karateka since he started training at the tender age of five at Northside Primary School and later joined Hayashi-Ha club.

“I have always been an active child and karate was one the clubs offered at school that caught my eye. I was just fascinated by it and decided to join at the age of five and 11 years later I am still passionate about the martial art,” Groth said. The Otse native revealed that his international breakthrough in karate was in 2006 at the annual Zone VI tournament held in Zimbabwe where he won a gold medal for Kata and a Bronze medal in kumite.

Groth has also participated in numerous international tournaments including the 2010 Miami Open Championships where he won gold, two silvers and a bronze, earning him recognition among other karatekas. He is the second ranked karateka in Africa in the 16-17 year category and also ranked the 10th in both kata and kumite by the World Karate Federation (WKF).  The karate star was the only medal recipient at the just ended weeklong Africa Junior Championships in Tunisia, winning a silver medal in the kata category and a bronze medal in the kumite contest. His winnings have earned him a place in the World Federation (WKF) Junior Championships in Madrid, Spain beginning of November.

Besides karate, the Maruapula form 4 student is also passionate about music as he is a drummer, a hobby he started at the age of 8. He is currently playing drums for jazz songbird, Samantha Mogwe and also plays marimba for a band dubbed Seragantshwane. Even though his passion currently lies with music and karate Groth, agrees that education is also important, as it is something one could fall back on when music does not excel.

When asked who his role models were, Groth said he would like to be like his coaches Sensei Ofentse Bakwadi and Mpho Bakwadi.  “They have shown great dedication and passion in what they are doing and I would like to be like, and also because they are now famed karatekas with high rankings and I could learn a lot more from them,” he said.

Groth’s upcoming tournaments for the remaining part of the year include the Commonwealth games beginning of October in Canada, which he says he might attend if there are enough funds to sponsor him.

“The greatest challenge we are facing is lack of funds to sponsor us to participate in different tournaments. I am currently looking for private sponsors who can assist,” he said. 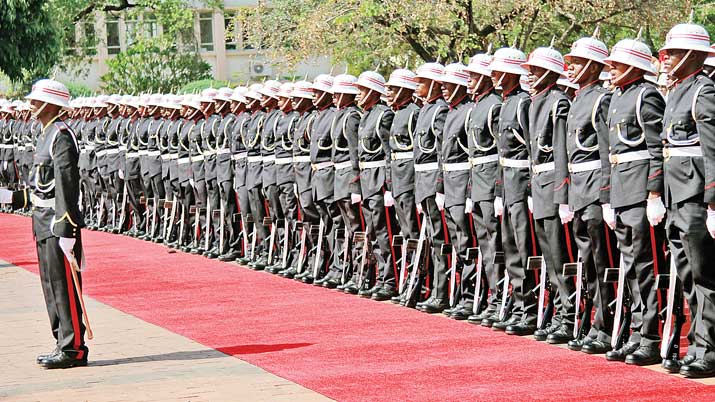