Media activist Phenyo Butale is set to be announced as Umbrella for Democratic Change (UDC) Gaborone Central parliamentary candidate. Butale was the favoured candidate to replace the late UDC vice President Gomolemo Motswaledi who died in a car crash three weeks ago. Butale has confirmed that he has been engaged by UDC leadership and later shortlisted, “I am awaiting feedback from the party. Yes I am definitely interested and would not say no should they come back to me with the offer to stand”

Butale is currently based in South Africa as the Executive Director of Freedom of Expression Institute and also former Director of Media Institute of Southern Africa Botswana chapter. Butale is understood to have always been the preferred candidate despite the other candidates having been approached. “He is seen as supportive as he has attended all the major UDC events. There is a feeling too that he can make inroads in the BDP following as well as the very crucial UB ward” an UDC insider told The Botswana Gazette a fortnight ago.

The Botswana Gazette understands that Butale almost did not make it as some labour activists lobbied hard for unionist, Andrew Motsamai. Motsamai has since withdrawn with reports that there was some strong opposition within UDC to his candidature as some did not feel he can be trusted or whether he was sympathetic to the UDC cause.   Motsamai, who is still a public servant was reportedly endorsed by BOFEPUSU and BMD members as the rightful candidate but has since withdrawn. Motsamai declined to comment on political issues saying his job as a public servant prevented him from doing so. Human Rights lawyer Uyapo Ndadi, Motswaledi’s brother Gape and Pastor Thuso Tiego are some of the names that were considered. Ndadi and Tiego declined while it is unclear whether Gape was approached

UDC spokesperson, Moeti Mohwasa would not comment on the matter saying consultations were ongoing. 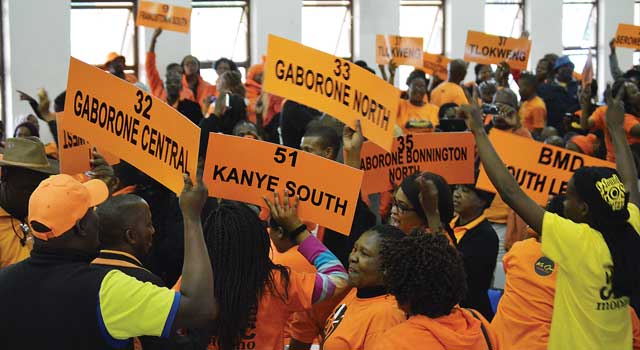