A dispute has erupted in Sesung village in the Kweneng District over ploughing fields that residents say were confiscated from them by the Kweneng Land Board (KLB) and allocated to the Kweneng District Council (KDC) with neither compensation nor consultation. The villagers are particularly irked by the fact that the land is also a burial ground that bears remains of their relatives.

Golebamang Masole told Botswana Gazette that the villagers were horrified to find a contractor clearing the bush on the disputed land. The first indication that something was amiss was when the people heard the loud noise of earth-moving machinery. Upon investigation, they learnt that the KDC had granted the contractor permission to mine gravel for internal roads in Letlhakeng from the area.

“They never consulted us but this is our land. The Land Board has asked those who do not have certificates of ownership for their plots to register. We were still to do so and don’t understand how the Land Board could give our land away,” Masole said.

He pointed out eight graves of his relatives and those of other people he knew. Two among those in the latter group are in the cleared land, a development which Masole said will make it difficult (if not impossible) for them to identify the graves in case the bush-clearing is stopped. All along they had identified the graves by using the cut trees as markers.
It turns out that neither Tumiso Tsietso, the village headman, nor the Village Development Committee (VDC) were notified about the confiscation of the land.
VDC Vice Chairperson, Seeja Botsile, said they were equally shocked to see contractors in their village without knowledge of what was going on.
“The contractor told us that the Land Board allocated the land to the Council in 2012,” he said, adding that the Committee had itself earlier unsuccessfully sought to mine gravel for the financial benefit of the community.

The VDC has since written a letter of complaint to the Kweneng District Commissioner calling for his intervention. Although no response had been given at press time, the Letlhakeng Sub-District Assistant District Commissioner, Tsholofelo Molobe, confirmed receiving the letter which she passed on to the Senior Assistant Council Secretary because the KDCC is responsible for the project.
Tsietso declined to comment on the matter stating that he was convening mediation talks.

Contacted for comment, KDC’s Deputy Council Secretary, Baipelelang Photlokwe, said the land was allocated to the Council in 2012.
“Before you can be awarded a mining permit or even allocated the land for a burrow pit by the Landboard, environmental impact assessment and consultation with the local community takes place. Every step was followed and the land is rightfully ours,” she said.

She confirmed complaints by the residents and revealed that during a meeting with Land Board officials, the former could not produce documentary proof to show that the land belonged to them. She added though that in the event that the land had been previously allocated to the villagers, the Council will use burrow pits in the area to mine the gravel so that construction of roads is not delayed.

KLB’s Public Relations Officer, Sandy Mosarwa said they are aware of the dispute and are currently investigating claims of people who said they have the land rights, an issue which was never raised before it was allocated to the Council.

“A provisional surface right permit was issued to Kweneng District Council by Kweneng Landboard/Letlhakeng Sub Landboard pending acquisition of mining permit from Department of Mines which authorises digging. The process of acquiring a mining permit requires several processes to be fulfilled such as Archeological Impact Assessment and Environmental Impact Assessment. Public consultations were conducted as per the Environmental Impact Act and from our records, there has been no objection to the proposal until  after the acquisition of the mining licence that some people showed up, claiming to have rights over the piece of land. The Landboard is now investigating this dispute to try and come up with a resolution,” Mosarwa said.

However, Botsile has maintained that there were no consultations. Sesung is located some 20 kilometers from Letlhakeng which itself is 60 kilometres west of Molepolole. 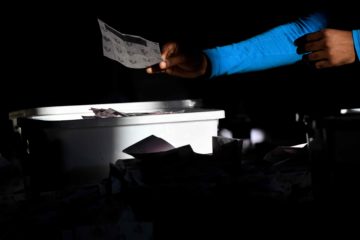