What will make Batswana vote in 2014 general elections? Will the voting numbers increase or decrease from the 2009 elections and are the voting patterns going to be the same? Will the people’s vote be influenced by a sense of obligation to participate or will the decision to vote be about changing the socio-economic or political conditions in the country or preserving the status quo? Whatever the answer to these questions, hundreds of thousands of Batswana are expected to cast their ballots on a date to be determined by the President of the Republic.

Enfranchisement or suffrage is the fundamental political right to vote government into office through a democratic process accorded to citizens who are 18 years or older. In spite of   the logical thinking that one’s vote cannot bring change, many people exercise their right to vote for various reasons. Some people vote because they feel a sense a duty and obligation, pride and feeling of belonging or patriotism while others think that their continued participation legitimizes the democratic process. Depending on the desired election outcome, in many instances, socio-economic, political and environmental and other considerations influence not only the decision of who or which party to vote for but also the very decision to participate in the first place.

When the larger part of Africa sunk  into one-party states, authoritarianisms, military dictatorships and other undesirable alternatives to liberal democracy, Botswana kept its record as the only country in Sub-Saharan Africa which has maintained multiparty democracy in which candidates and political parties are allowed to exercise their right to vote freely and somewhat fairly. The country has never postponed constitutionally due elections and violent political protests sparked by allegations of ballot fraud are alien to Batswana. The country has, however, endured voter apathy in many of its elections held every five years. This sparks the question; will the events of the period between 2009 and 2014 influence the decision to vote and how to vote?

The economy has not been able to create enough sustainable jobs, poverty is still an issue and general economic hardships persist. The country has been plagued by water and power shortages at unprecedented scale. Unions and government are in perpetual labour fights and this has culminated in the 2011 public sector strike which lasted for 2 months and sour industrial relations in the country. Corruption is on the rise and those in power refuse to be transparent and account. This has kept both the anti-corruption agency and parliament with its select committees more busy.
Intra-party feuds have become a feature of the country’s body politic. The ruling party produced a fragment in 2010 as a result. Several ministers and incumbent Members of Parliament and councils lost in primary elections in the Botswana Democratic Party (BDP) which were characterized by allegations of cheating. The party lost its party chairman and remains deeply divided whilst its elections appeals process is still ongoing. Will all these affect the BDP’s electoral dividends in 2014? There has been a dense traffic of politicians crossing from the ruling party to the opposition and back and others crossing from one opposition party to the other. This angered many voters who may use the 2014 opportunity to respond.  The opposition failed to go to the polls as a unit; the Botswana Congress Party withdrew from the talks leading to a near collapse of the project and the remaining three parties are still struggling to finalize their deal in the midst of intense internal dissent. And in the midst of all that, the Independent Electoral Commission (IEC) failed to meet its targets, fewer people registered to vote for the upcoming elections.

The Gazette took to the streets and asked the youth, who demographically constitute a significant portion of the population, whether they have registered, or will register and ultimately vote in 2014.
“A lot of reasons have made me want to vote this year unlike in the past and yes I have registered. I want to vote because I would like to see the current government changed. I do not think that their agenda is to improve the lives of Batswana, all I see them doing is enriching themselves. The same people winning government tenders are the same people running government and I don’t think that is fair. An example is that of Ndelu Seretse’s wife winning tenders in her husband’s ministry. Another issue that bothers me is that of taxpayers’ money building an airstrip in the President’s private land while there are other burning issues,” a 28-year old, graphic designer Aaron Molete observed.

Another Moseki Kabontle (25), who is unemployed said, “Yes, I have registered to vote. Although unemployed I have very few problems with the current government. I think people will always talk, no matter what you do. The government has come up with a number of initiatives to help Batswana, we get seeds for free to plough our fields, we got to school for free, our grandparents and parents get pension, you are given internship when you are done with university and there are other initiatives that are doing so much to help us but we still complain. I went to do my tertiary studies in South Africa and I got to interact with students from other nationalities and just seeing how little other governments are doing to help its people, I just got to appreciate the privileges that we have that we take for granted here in Botswana. Those are the reasons that will make me cast my vote this year.”

Tumiso Kentshang on the one hand has not registered to vote and her reasons she says are because either she votes or not, the seat of government will not change. “What will make me vote is a political party that speaks to me and there is none that has.  Politicians are jumping from one party to the next and that has killed the little trust and respect I had for politics so whatever laws are passed down I will abide and if I am that bothered I will move to a different country.”

When answering a question on what a young voter should be looking at, Lesole Machacha, a political analyst at the University of Botswana advised that, “I can understand the frustrations that some youth have as to why they are not voting but the reality is that voting is everything but before one can make their way to the voting poll, there are a few dynamics they have to understand. First, political education of your surroundings is important; know who is representing you in your ward and how he plans to meet your ward’s needs. The second thing is to actually register to vote because no matter which way you look at it, voting is the only way in which you can be able to secure your human rights. Your needs and aspirations can only be addressed when you vote for people who can stand up for you in parliament and if you don’t vote then, how will those needs be heard and addressed?” 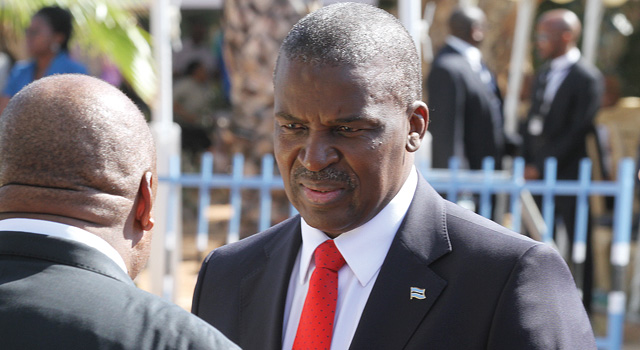