This past weekend Ditshupo hall experienced an explosive interactive ministration of praise and worship as celebrated South African gospel artist Winnie Mashaba alongside local gospel artists and choirs set the stage ablaze with their high energy performances, much to the thrill of the audience. The gospel concert was aimed at raising funds that will go towards the construction of Lamb’s Followers Apostle church (LFAC) in Mogoditshane.
“We are not here to rob Batswana; we are here to preach the word of God as well as to offer a helping hand by raising funds that would go towards the construction of a church. All of the show’s proceeds will be given to the church and I must say I am more than happy in assisting my brothers and sisters,” said Winnie Mashaba in an exclusive interview with Time Out.
The show that raised an amount close to P11 817 attracted gospel music enthusiasts from youngsters to senior citizens, who all seemed to be having a good time with Pastor Rebaone Joel Keitumele and Mokaragana presenter Atamelang Mmopi, who were the concert’s masters of ceremony. The show was also graced by the presence of Minister Mokgweetsi Masisi as well as Big Brother house mates Oneal and Feza.
Mashaba performed some of her hit songs such as Jwang kapa jwang, Ke rata wena, O tla ya Kae among others from her previous albums as well as songs from her latest album dubbed Bophelo ke Leeto that worked the audience into a frenzy of excitement. A local line up of gospel artists and choirs including Phempheretlhe, Pagson Ntsie, Obakeng Sengwaketse, Matheke Leteane, Devine choir, Lesedi Alpha, Blazing Fire, Calvary choir Methodists church choir, Basha ba spiritual choir among others  also proved that they not only have amazing talent but were also brilliant and versatile artists with an electric stage presence.
Speaking to Time Out, Mmabakwena Bareki a senior citizen who attended the show said, “This is the perfect event for me as an older woman; at my age you basically have no events to attend for leisure so I am very grateful that today a gospel concert that catered for some of us was organized. Moreover, there is nothing as amazing as watching young people who are also musicians enjoying themselves on stage praising God. It was a dream come true to see Winnie Mashaba. I have been following her music since her first album and never thought one day to would get to see her live!”
Another attendant Lesego Mokwape,  added that even though artists gave the concert their all there were a few hiccups that needed to be improved. “Winnie went on stage at 0200 am even though the show started at 4 pm; that was a long wait and I had expected the show to end earlier looking at the fact that there we children at the show. There was also the problem of sound quality but I am happy they finally resolved it as the performances went on. Either than that I enjoyed Obakeng Sengwaketse and Pagson vs Joel’s performances,” she said.
Commenting on the exciting part of the show Mashaba said, “This concert had a lot of choirs; I love choirs and I would like to feature one of them and as for local artists I am interested in featuring Phempheretlhe. Actually,   if it was possible I would like to feature all of them.” 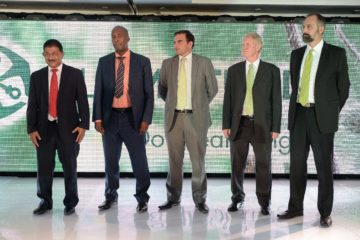