The comics have watched Skelemani closely as the Speaker urged MPs to keep their eyes on the ball, excoriating them when they didn’t. Staff Writer GOSEGO MOTSUMI met them recently

The initial COVID-19 lockdown in April and the highly-publicized parliamentary sessions on BTV inspired creatives to explore their talents on digital platforms. Among them are “Mr Speaker” and “Honourable BW,” a comic pair that burst onto the scene and prompted rave reviews for impersonating the Speaker of the National Assembly, Phandu Skelemani, and other MPs.

In their comic inserts that are uploaded on their Facebook page that has attracted more than 54 000 likes, Bokamoso Baitse is the inimitable Skelemani while Kefilwe Matsetse assumes the roles of different MPs in the August House. “History was made when the parliamentary sessions were live on TV for the first time and everyone’s eyes were glued to the screen in their living rooms,” said Baitse in an interview.

He masters the accent of the Speaker of the National Assembly to a fault, replete with the near-stuttering of the native of Mapoka. In this role, Baitse the comedian does much credit to his craft and work as a drama director and actor. He says he has been watching Skelemani at work from the time the former Attorney General was Minister of Foreign Affairs from 2008 to 2014. A lawyer and diplomat, Skelemani has brought to Parliament his courtroom tactics of putting away felons and tenacity of keeping a respectable place for Botswana in the comity of nations, hence his insistence on MPs to keep their eyes on the ball.

“I had been watching other Speakers but there was something different about Skelemani,” Baitse told The Gazette. “There are a lot of characters we could have chosen to impersonate, but Mr Speaker was in control of his audience and earned our attention, thanks also to his great sense of humour.”

After the parliamentary sessions ended, the Maun-based creatives turned their attention to other issues of current affairs to keep their growing audience entertained. They are optimistic that their comedy careers will prosper because they are now being approached for commissioned work. Just last week, the duo was selected as comedy finalists in the First National Bank’s “Bodiragatsi Jwame, Lentswe Lame” initiative that seeks to support creative arts during these difficult COVID times.

Apart from comedy, Bantsi and Matsetse are drama directors and scriptwriters for The Voice of Artists drama group that is based in the small village of Kuke in Gantsi. They have participated in the President’s Day Competitions over the years and have been happy to return to their day jobs as entrepreneurs in the informal sector when not on the creative scene. 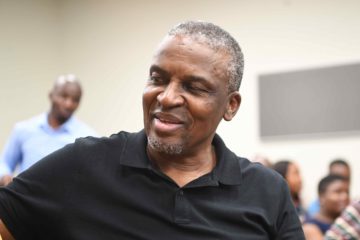