ATI is now a free man after Prosecutor King Tshebo from the South Central Section division was instructed by the Chief Magistrate Court of Extension 2, Kamogelo Mmesi to amend his charge sheet that arraigned the artist before the Extension 2, Magistrate court this afternoon.

ATI was charged on failure to comply with directions given by an authorised officer in a protected area according to Section 5 sub section 3.

Said advocate Duma Boko during the court proceedings:”This charge sheet is lacking in material, its fatally defective. Why is this officer in charge’s names not mentioned in the charge sheet? Why do we fail to disclose the details of the complainant? The prosecutor should go back and draft a proper charge sheet and include all the laws that the accused has breached. There is no urgency in being here.”

ATI was arrested by Central Police Station officers for taking pictures at a prohibited area last night. The artist was last seen yesterday in a video in which he revealed that he was going to central police station as he has been reported for photographing himself by the state house.

President of the UDC, Duma Boko, and his associate- attorney Boingotlo Toteng, were this morning at the Central Police Station in an attempt to free ATI 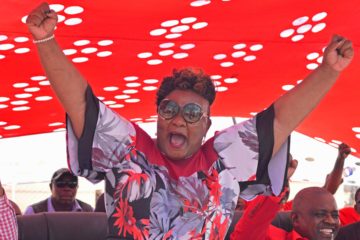