The Death of NCHINDO: 7 years on

The month of February marks the 7th anniversary of the death of controversial business magnate and former Debswana Managing Director, Luis Goodwill Nchindo, one of the most powerful figures in Botswana’s political and economic history who was once dubbed “Kingmaker” following revelations that he was instrumental in entrenching the interdependent relationship of De Beers and the ruling Botswana Democratic Party (BDP).
Nchindo’s death in 2010 was the conclusion of what had been a remarkable public fallout between Botswana’s ruling elites and the beginning of something of a horror show which gave Batswana a first seat glimpse into happens when things go wrong in the big boys’ club. Earlier that year, in January, the man who admitted to being bosom buddies with the former Debswana boss, former president Festus Mogae, revealed that he was being threatened and blackmailed by him with corruption allegations.
“He asked that I halt the forensic audit, which I had ordered into his former company Debswana, and drop the criminal charges against him by the Directorate of Economic Crimes and Corruption (DECC). When I refused to cooperate with him he said he would expose first his companies dealings with my predecessor, their financial support of the governing Botswana Democratic Party, and last but not least he would tell the nation of my private social affairs with girlfriends, who shared a few pleasant evenings with me in his firms guest house. In response to the man’s presentation I noted that his request was equivalent to blackmail, which I would not succumb to, and he should therefore proceed to tell his ‘story to one and all, because I had nothing to hide. Later on, he went to a number of people in my party and said that as regards the criminal charges against him he ‘would not die alone’,” Mogae revealed in media excepts of his memoir written by Botswana-based American political scientist, Wayne Edge.
Nchindo however denied Mogae’s claims, rebutting him in a press release.
It was later determined that Nchindo had a case to answer in a matter in which he was facing 32 charges, accused of among other things- corrupting public officials after he was said to have attempted to acquire large areas of land across Botswana for purposes of tourism development in his capacity as both a property developer- through his companies, Golconda Pty Ltd and Tourism Development Consortium and as Debswana managing director.  He was charged at the time alongside his son Garvas Nchindo and former Debswana Secretary, Joseph Matome. The latter was accused of “knowingly” giving President, Mogae false information by representing to him that Nchindo’s companies were vehicles through which Debswana was contributing the country’s economic diversification endeavor. Matome and Gavas Nchindo were later acquitted.
During his trial, Nchido spilled the beans on how he had helped arrange secret loans from DeBeers to former President Ketumile Quett Masire, causing a political scandal which led to some people suggesting that it was linked to his grisly death on 8th February 2010.
While his death left many unanswered questions, it left a legacy which was anathema to the good reputation Botswana had built herself in the previous 44 years- where it was believed that “such things do not happen in Botswana”. While the distrust of ruling elites was nothing new at the time, the drama was the rare occasion where such scandals played themselves out in public.
If Nchindo’s death has a meaningful legacy for Botswana, it showed the extent to which people in his position collude and entrench themselves in questionable practices that do not only preserve a certain political hegemony at all cost but how the hegemony is maintained through public institutions to the bitter end.
While the surface take away for the small man maybe that if you cross certain people, you will be killed and left to be eaten by lions, the Nchindo affair is yet to be fully unpacked, together with the secrets he took to the grave, if he died at all- because there is still belief that he is still alive, enjoying life in the shadows somewhere out there.

The Death of Nchindo - No “second cut” of History

The Death of NCHINDO: 7 years on 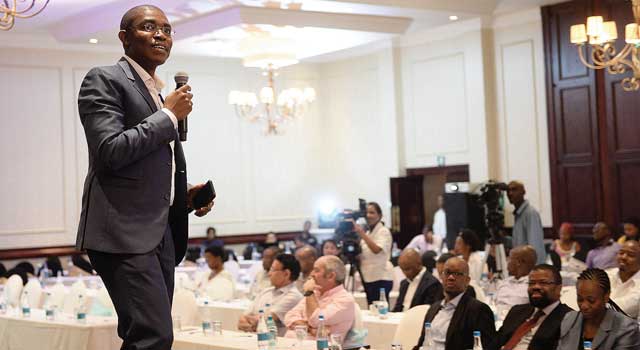