The BDP congress in Maun coincided with me having paid a visit to my home village to lay to rest a relative who had passed on. Having arrived in Maun a week earlier, I noticed a strip of the road in our neighbourhood turning off at the popular Duck Pond shops off the tangent from the main road facing westwards towards Tawana Primary School. The road is normally laden with heavy loads of sand such that one will never dare drive through it. However, I noticed a stark contrast to the known condition of the road; a stretch of road was maintained only half way through.

That stretch of road connects to one of the internal roads passing near Tawana Primary School. So it was convenient for whoever was doing the road to connect it to the tarmac because of its relative length of approximately one kilometer. Being the inquisitive type, I was brooding over the objective behind the fi rst maintenance of the road and I immediately asked my friends who are regular patrons of the road if the local authorities have been so generous enough to show courtesy and ease the terrain that makes using it a challenge. They too, didn’t give it much consideration thinking it’s just a publicity stunt since elections are here.

It didn’t appear to me that the road was made for the convenience of His Excellency, who was in few days, coming to patronize the villagers, taking advantage of the BDP Congress hosted in the Village. It was not until that Wednesday afternoon that three white brand new Land Cruiser station wagons were serenading that road up to the point where the road was maintained, that the intent and purpose of maintaining the road was made clear. The contingent of the Land Cruisers attracted attention because it was an unusual sight in the low income area commonly named as Tawana by its residence.

Like the biblical donkey that carried the messiah, the road was being used to transit the fi rst citizen that day to access a family who would be donated blankets that day. The blankets ritual was performed and for the next three days it was the “talk of the town “in the small community of Tawana. The interaction of HE and the people and of course, the blanket magic that day reminded me of the technique and tactic of BDP endearing itself to the people. In the next two days, BDP members were all over painting the village red. From shopping malls, bars and other entertainment centers, they were very confi dent that they are making a mark in the tourist center of Maun that has been hit hard by the effects of the foot and mouth disease.

I interacted with BDP cadres on one occasion where I sincerely asked them if they believed their party was taking Batswana somewhere in terms of the Economic drive, and further impressed upon them the toll of FMD on the people of Ngamiland and a possible protest of votes in the next elections. I sought to hear from the democrats their comparison of the Vision 2016 goals and the actual standards it obtains on the ground. Having found them in a jovial and victorious mood enjoying their drinks and chanting the party slogan of “ae jeke!” after our interaction and debate,I could sense their mood was not as jubilant as I found them.

Some of them agreed with me that Botswana is faced with serious socio-economic challenges and that the political leadership could do much better than to patronize people by ‘blanketeneering’. I discerned from the conversation that a lot of them just have a soft spot for the BDP and that not all believe the party has a magic formula to provide a stimulus package for Batswana. It became evident that the success to BDP is more to do with its presence in the print and electronic media and largely to its incumbency that comes with the privilege of addressing Kgotla meetings and other state platforms. Back to the issue of Ngamiland, a state of emergency is required to be declared and preferential treatments needs to be extended to Ngamiland as far as the effects of FMD is concerned on the livelihood of the people.

These are all projects that wasted taxpayers’ money of which I am party to. The national stadium saga is just one of the topical issues that assure me BDP doesn’t need my vote and affi liation. So, in a nutshell, I am as far away from BDP as the west is from the east. Thus, Maun needs a new crop of politicians to rise. After the passing on of Rre Motsamayi Mpho, the late Friday Bonang, the fading of Robert Makgetho and the international diplomat David Rendo and of course the once maverick Gaditshwane Mmutle to mention but a few, Maun has a challenge to produce young opposition politicians who will fi ll the gap created by the veterans who can take on the fi – nancially powerful remnants of the white settlers and the feudal hegemony selling BDP.

Apart from some few opposition activists, Maun faces a serious political brain drain among the ranks of opposition. Of course, Kgosi Tawana Moremi still remains an epitome of inspiration among the opposition but not enough to balance the scale against the conservative and highly resourced BDP. You can therefore deduce that the Maun community has not benefi ted from hosting the BDP Congress in terms of policy formulation infl uence, but rather that the BDP has gained in consolidating its power in the tourist town of Maun by selling its brand.

One thing clear is, the dust has cleared after the eventful BDP Congress in Maun but the fortunes of the beef industry in Ngami land has not improved one bit. The FMD situation in Ngamiland needs to be championed by opposition politicians and not the same BDP functionaries who put the party image and interests fi rst and everything second. With the national elections around the corner, it will be interesting to watch how the traditional BDP voters will cast their votes amidst the debilitating effects of FMD on the socio-economic means of their livelihood. 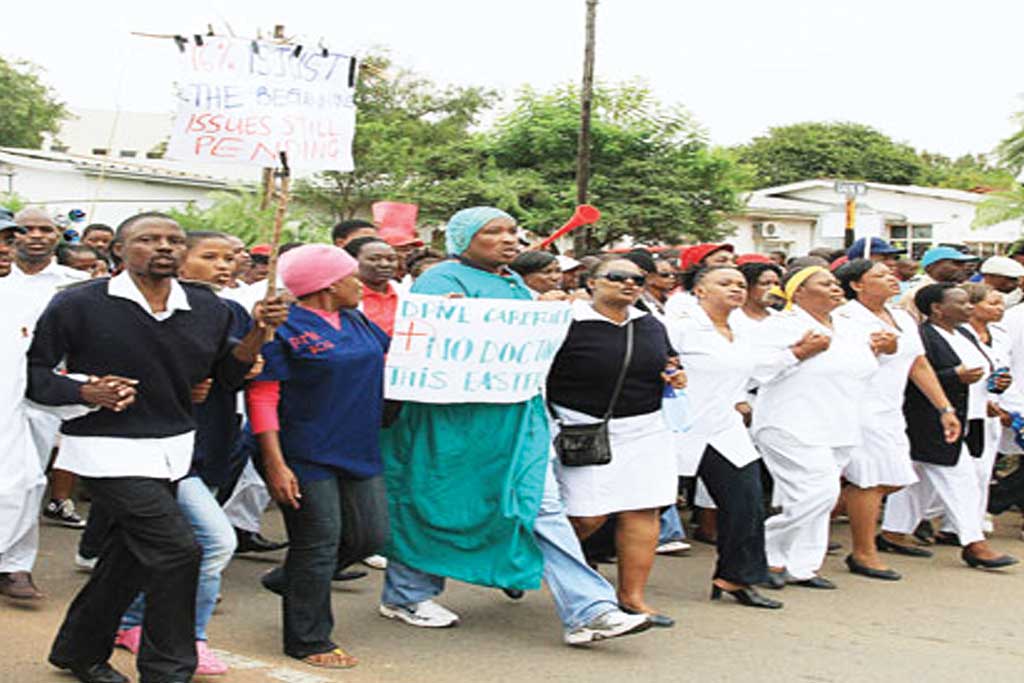