• BONA and INF to meet Supersport to negotiate broadcasting deal

• Major INF board congress to be held in Botswana, a first for Africa

The Botswana Netball Association (BONA) has taken giant steps in their preparations for next year’s World Youth Netball Championships scheduled for July (8-16), the association has identified an international coach whose name will be announced once both parties conclude contract negotiations.

BONA president Tebogo Lebotse-Sebego confirmed, in an interview with Gazette Sport, that their search for an international coach has been concluded. “We have identified someone. We will start negotiating contract terms with her soon. If she agrees terms then we will reveal her name, we want her to play a dual role of taking over the youth team and also help them make a transition to the senior team. Our ideal aim is for the incoming coach to oversee both the youth and senior teams,” said the BONA president.

Lebotse-Sebego also revealed that they, along with the International Netball Federation (INF), are scheduled to meet South African broadcasters Supersport to negotiate a broadcasting deal that would see next year’s tournament given a slot in the pay per view sports channels.

Supersport has supported netball on numerous occasions and they have televised African and world tournaments in the past few years including the 2015 Netball World Cup. Supersport has already secured the rights to host senior netball world cups but that excludes youth tournaments, thus the need for BONA and INF to negotiate a broadcasting deal.

The BONA leader also confirmed that they are currently in negotiations with local broadcasters Botswana Television (BTV) who will also be listed as broadcasters of the global youth tournament.

“BTV will play a major role, as a local broadcaster they will surely have to be a part of the deal. We want to bring the tournament to named the country’s best run association. Their president, Lebotse-Sebego, is one of the longest serving presidents in Botswana’s sport codes, she has been at the helm since 2007.

Her consecutive nine year tenure is second to none in local sports, she is also a continental leader as the president of Africa Netball Federation where she assumed the position in 2011. She is also an INF board member, she is listed as one of the major directors in the world netball body. She credits her longevity to being an over committer in every task she faces.

The Botswana senior national netball team is currently ranked 19th in the INF world rankings. The country has also produced two Most Valuable Players (MVPs) in the Singapore Super League in Ntebogang Motlakaleso and Hildah Binang in recent years. The players’ ability to settle well in foreign leagues is testament to their development locally.

BONA has been somewhat scandal free and their president has praised her executive committee for “being focused on what’s best for the game, avoiding politics that would ruin the game and making sure that the player comes first (making players the most important parts of the association).”

Lebotse-Sebego has aspirations of being the INF president in the future but noted that it is not an idea she is obsessed with as she is also a doting parent. 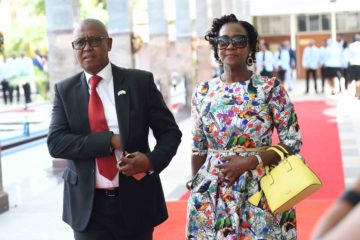