The Botswana Gazette has intercepted a series of email-conversations, letters and confidential records all of which lay bare the dispute at hand between the Banking entity and Oseg Group -a BPO and a local financial services company.
In his correspondences to the above-named authorities, Oseg group’s Chief Executive Director, Majakathata Pheko says he has evidence that powerful people in the bank and a cabal of “ friends both inside and outside the bank were intentionally and aggressively looking for ways to weaken Oseg Group, tarnish its name diminish its value as they were in the same competing businesses interest, in the call centre business and the factoring business.”
Pheko says someone in top management and his business partners in their undying pursuit to kill his company have gone out of the way to violate banking legislation and regulations including the lobbying of two other banks to deny his company financial services.
In an “… (e)ffort to implement their covert operations, (name withheld) and his cabal have contravened some of the laws and regulations governing the Bank in Botswana and United Kingdom. Amongst them are as follows; the National Clearance and Settlements Systems Act (Botswana Bank of Botswana), treating Customer Fairly (FCA ACT UK), disregarding the Banks primary duty of disclosure, failure to implement Court Orders and falsification of records” he says in some of his letters addressed to the three governing bodies.
According to Pheko the matter has caused serious injury to his business leading to a loss of approximately 150 employees and he now remains with only fifty due to the financial impact of the banks conduct.
The Kenyan centre in Nairobi which has been providing operations services to the bank’s several subsidiaries, including Botswana, Zambia, Uganda, Tanzania, South Africa in responding to the report has vowed to get to the bottom of the case.

‘Manufactured overdrafts and Underground dealings’
Oseg Group which is also the current ambassadors of Factor Chain International for Southern Africa says in 2013, Oseg took out facilities with Standard Chartered Bank and due to poor business at the time they failed to service the loans owing to the bank due to their then prevailing constraints.
Oseg claims that its efforts to engage with Standard Chartered Bank to get an indulgence while sorting out the financial difficulties were futile.
“Our efforts to resolve this stalemate and demonstrate that the bank consider a path towards rehabilitation as we had 5 major contracts in the pipeline of which 4 of them were already signed or in the stages of completion failed,” reads Oseg group’s complaint letter to Bank of Botswana.
“All of these contracts, we demonstrated through the cash flows and demonstrated how they will impact on the revenue of Oseg as all of them had the capacity to increase our revenue streams by more than 50% and double our income base in 3 years,” Oseg Group noted further that to their shock, the Bank refused to give them the chance to perform and rehabilitate their account in order to pay off the debt.
“Even after we made the efforts to secure consolidation facility from other banks and in this case Capital Bank, acting in good faith we immediately called the bank management informing them that I have been asked to get a letter of undertaking in 3 working days. Notwithstanding the fact that I had informed him to expect Capital Bank to consolidate Oseg facilities with Standard Chartered, we were shocked to learn that within 48hrs the bank had issued a notice of sale and execution,” Pheko further alleges.
In his complaint to BoB, Pheko indicates that upon realising that the conduct of the Bank did not seem to tally with its normal practices they began to make covert inquiries where upon they learnt that they are fighting a losing battle.
“We were later able to learn that our case was handled in bad faith all along as we received
tip-offs from internally (sic) and from a couple of business people,” the letter further states.

The ‘masterplan to sink Oseg?’
A plan was hatched to sink Oseg, Pheko claims it was a well-orchestrated one. This was reflected by the consistency of the multiple tip-offs they received and investigated on why treatment on their account had been allegedly discriminatory, unfair and in some cases overboard to the extent that banking regulations, country laws and ethics were transgressed in an unprecedented manner.
“We were informed that Oseg was targeted and efforts to pursue an aggressive campaign were initiated, amongst other Oseg was provided with terms that are not conducive for rehabilitation. The campaign we leant, left no option for rehabilitation, as was demonstrated by officials of the Bank demanding that we pay the whole balance outstanding,” Oseg says.
One of the contracts Oseg says was the Factoring partnership with Barclays which was already signed and the refusal by Standard Chartered Bank to give Barclays the go ahead to proceed with Oseg jeopardized the deal.
“This was rejected notwithstanding the fact that we had demonstrated our cash flows due from this contract; this was however rejected by a senior bank personnel (name withheld) who bluntly and arrogantly said that they did not want to unlock us, meaning they did not want to unlock us to be able to pay the bank” he said further that this left them shocked and perplexed as how the bank could not want to enable its customers to be able to run and pay them.

“Illegal Overdraft Facility?”
Oseg further told the governing bodies that their investigations also revealed that once their account reached charge-off status, instead of being written-off and instalments and interest ceasing, their accounts were kept alive through unauthorised debiting of their overdraft facility that was meant for Oseg working capital.
The continuation of the debiting of the overdraft, Oseg group says, continued until they realized that not only did they not authorize the Bank to debit the overdraft account to service the non-performing loans, but that the bank also exceeded the overdraft limit of P1 Million and proceeded to debit our account over the limit unauthorised.
“Upon us noticing that the bank was servicing the non-performing loans from the overdraft and that the overdraft had ballooned and increased our exposure exponentially, we immediately informed the bank management. The Bank managed to stop the instalments being debited through our overdraft account but instead continued applying interest on the outstanding loan amounts even after judgment had been sought and awarded,” Oseg group’s letter says.
In a shocking revelation, Oseg group said the Standard Chartered Bank continued to run and apply the interest until the debt ballooned to P4.4 Million.

But what was Oseg group expecting?
“Our last payment made to the loan accounts was on the 9th July 2014 and as expected the accounts were supposed to be charged-off in November 2014. Assuming our accounts were charged-off in November 2014 as per normal banking regulations, the balance on our loans would have been P3,500,940.11 less P850,000.00(deposit held in call) = P2,650,940.11b. In November 2014, instead of the Oseg accounts charged-off and interest and instalments ceased to apply, we realized that the accounts were kept alive by debiting the overdraft account which then had a limit of P1 Million,” they say in the letter.
The overdraft account they say was debited from November 2014 to April 2015 surpassing the P1 Million limit and reaching an amount close to P1.6 million to service the loans that could have been charged off in November 2014.
“The result of all this illegal and unauthorised transactions on the loan account and overdraft account meant that our outstanding loan amount ballooned to more than P4.4 Million as at July 2016 as we accrued interest and penalties on the unauthorised overdraft and the loan accounts,” they claim.
Oseg group also expressed fear that Standard Chartered Bank ‘s conduct shows that they might even conceal more toxic assets that they are not disclosing to investors and the regulators.
Oseg group also accuses Standard chartered Bank of going against the basic principles of customer confidentiality by influencing and conniving with other financial institutes not to consider financing available to Oseg, in what they believe was done to prevent Oseg from accessing consolidation facilities that would have enabled them to clear their facilities with Standard Chartered Bank.
Oseg further revealed in the documents to BoB that one of the banks former employees called them for a meeting and informed them that the officials and managers close to (name withheld) were on a campaign to destroy Oseg and that they were tracking where it had made enquiries through use of the Credit Bureau. “They would then call other banks and inform them why we should not be assisted,” Oseg decried the unfair treatment.
The report also says on the eve of Oseg attending the Afrexim Bank Factoring workshop on the 24 the November 2016, they were further tipped off that the CEO and his colleagues at the Bank would do everything at their disposal to make sure that Oseg does not attend the event as to prevent the CEO of Oseg from having the opportunity to meet the bank’s international partners and regional management and relating his grievances to them as to the bank’s conduct and what was happening at Botswana Standard Chartered Bank.
The story does not end there, Pheko, also claims they were also told that their pending payments from Attorney Tengo Rubadiri would be interfered with to keep their team from making it to Mauritius.
This, he says, indeed came out to be true as the attorneys trust account was held at Standard
Chartered Bank, reads a letter to BoB.
“On the 10th November, our client whose funds were under contention through the courts managed to get a judgment in their favour for the funds to be immediately paid out to their creditors. Upon receiving the Judgment from the courts of law, the Attorney Tengo Rubadiri effected all the payments due to all the creditors and all the creditors were duly paid of the same day i.e. 11/12/2016,” he wrote.
In building up his case, the complainant further says a certain transfer of RTGS P460,895.00 remained unprocessed from the 10th November 2016 to the 16th of November until they threatened the bank with a legal suit.
“One Branch Manager (Name withheld) who was shocked, confirmed that this event is the first of its kind and that it was the first time an RTGS transaction of such amounts has never been effected (sic), more so that it had remained in that status for more than 3 days. We had a meeting with her and promised to check her in 1 hour,” the letter reads.
Oseg told the governors that they have since asked the Attorney Thengo Rubadiri to furnish them with the copy of the transfer “MT 103”. From the email exchange with the attorney Mr Tengo Rubadiri, it seems the bank is not cooperating with his request, noted Oseg, in what they describe as interfering with the genuine customer instructions.
Questions sent to Standard Chattered media relations manager were not responded to at the time of going to press while the Bank of Botswana, Head of Communications Andrew Sesinyi confirmed that they have received the complaint and were investigating the matter.

Fako and the UB forgery drama 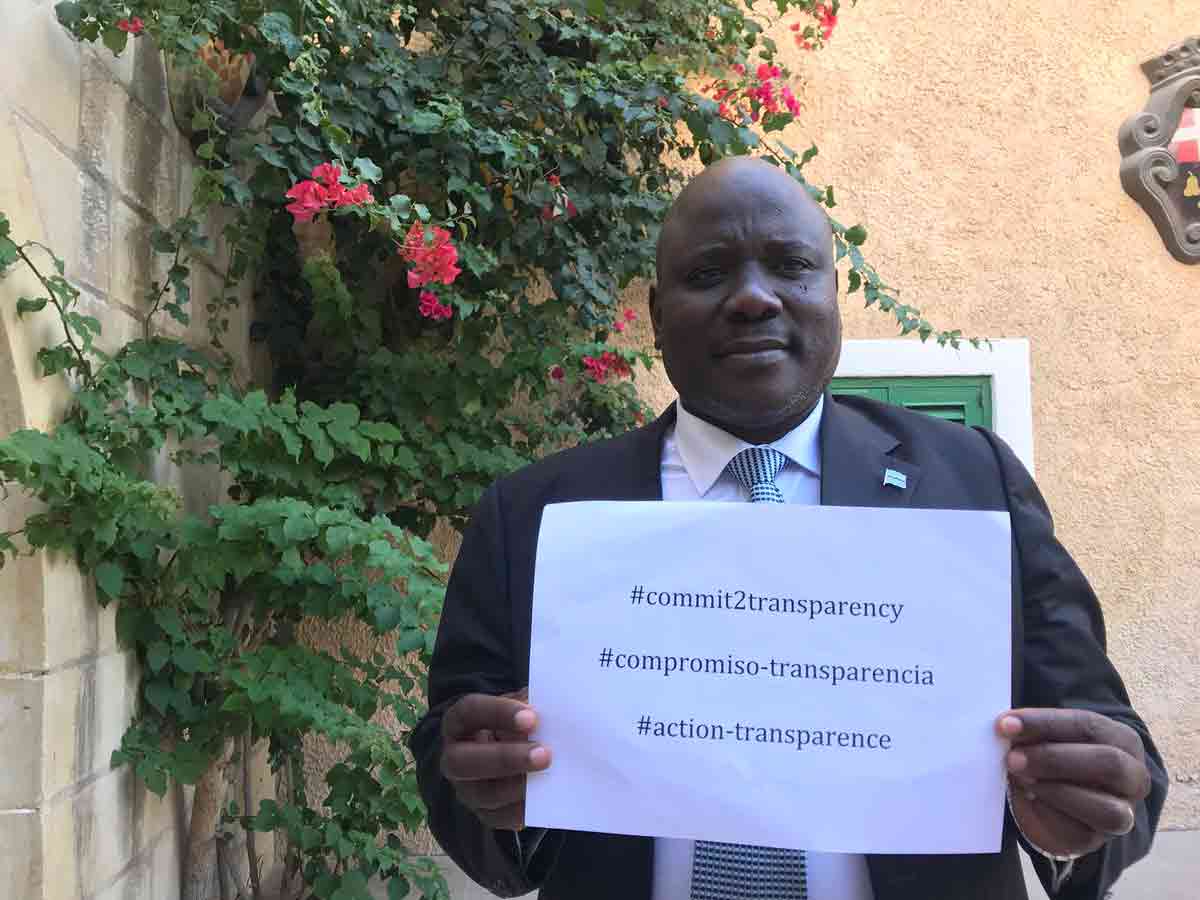