Allegations have surfaced from Bakgatla-ba-Kgafela Paramount Chief, Kgafela Kgafela’s spokesperson, Victor Modimakwane that the Botswana Government is conspiring to deport the embattled chief from South Africa.
Currently Kgafela is embroiled in a protracted power struggle with his uncle Kgosi Nyalala Pilane  and the South African government. Since his relocation to RSA last year he has been battling to have his uncle de-recognised as the chief in Moruleng before the court. In one of his cases, he is demanding that his uncle’s lawyer Wycliffe Mothuloe account for R49million he received as payment from the Bakgatla Trust account.

He said that they were in possession of a letter authored by the Premier directing the Home Affairs Department in Rustenburg to investigate whether Kgafela entered S.A. through a gazetted point of entry at the time when he fled from Botswana to South Africa last year. The move, he alleges,  is intended to deport Kgafela back to Botswana so that he does not pursue his court cases.

Kgafela’s spokesperson, Victor Modimakwane told The Gazette in a telephone interview that, “We received information from our sources within Mahikeng Home Affairs that a communiqué has been sent from their office to the Rustenburg office to furnish the North West Province Premier, Thandi Modise with the said documents. President Khama and some senior officials here want the documents.”
“The premier is favouring Nyalala because they are afraid that should he step down, both of them might attract criminal charges,” alleges Modimakwane.

According to Modimakwane, the two governments are trying every move possible to have Kgafela taken back to Botswana. He said Kgafela’s team was alert to every move planned against their Kgosikgolo.
Contacted for comment, Provincial Head of Communications and spokesperson in the Office of the Premier, Lesiba Kgwele said the Office of the Premier is least interested as to whether Kgafela or any other citizen of any country has a passport or not.

“The Office of the Premier and the government of South Africa are not interested parties to the conflict between Kgosikgolo Kgafela Kgafela and Kgosi Nyalala Pilane and take serious exception that there is an attempt to portray it as part of the conflict,” he said.

Kgwele said that the Premier had in her first meeting with Kgafela following his relocation, indicated that the application for dual citizenship should be directed to the Department of Home Affairs as it is not a provincial competency.
Asked why the issue of how Kgafela crossed to SA is attracting attention after he has been in SA for a long time, Kgwele said, “though we would not know because we do not deal with immigration, our country has laws which should be respected by everyone including its citizens.”

When contacted for comment, the Home Affairs office in Rustenburg said their information cannot be shared with third parties. He said even if they were to carry out the investigations, they would only deal with government departments. The Rustenburg Home Affairs station clerk, Thabo Letsholo said they did not know anything about Kgafela’s investigations.
Botswana Government spokesperson, Dr. Jeff Ramsay told The Gazette that he was not aware of the allegations. He said the matter is security related and appropriate institutions are better placed to shed light. 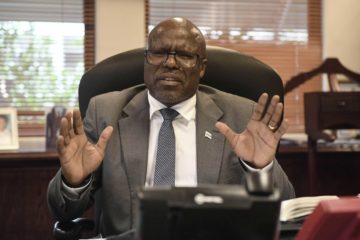