January 16, 2020 Admin
Home»Opinion»Column»“Stop Shaming The Men Who Are Attracted To Us”
Column/Opinion

There is a fresh local song I am currently smitten with titled “Take a Drive with Me” from a collaboration by two local artists, Chef Gustos and Motswafere. If memory serves me well, it was early in June when it had just hit the airwaves that my little sibling, Motswafere, shared it with me.

I am proud of this young queer soul since their time on My Star shocking Batswana to the reality of the existence of queer feminine beings that are unapologetic like Motswafere and building a solid career as a multi-talented artist since. “Take a Drive with Me” makes me want to take a long drive to the Southern Penninsula of the Western Cape, much like the hit song “Drive” by Gavid Guetta and DJ Black Coffee featuring Delilah Montagu. These are songs that instantly hit you with a vibe and teleport you to a place far from where you are.

Motswa and Chef Gustos did a good job on their collaboration, and I must admit it is one collaboration I least expected in a country like ours. The fact is that we have so many out and queer artists in Botswana that are at par with other international artists, vocalists and musicians. One of them that I am equally smitten with is Shanti-Lo who is a global sensation in the Afro Jazz and Soul arenas. I will never forget the first time I met Shanti. This was in 2011 in Stockholm, Sweden while I was there for the Europe Pride Festival that Stockholm was hosting and Shanti-Lo happened to be a headliner act at a concert I was asked to speak at.

I spoke in front of close to 2000 persons in the audience that grew with every hour of the day that witnessed sunset around 22Hr00 as it was full-on summer while Shanti-Lo and their band made them move to some Setswana jazz tunes thereafter. I was in awe to have met a powerhouse of a musician who wowed the masses that came out to celebrate a continental pride event and to see us as Batswana who are international influencers. Whenever I meet either Motswafere or Shanti-Lo, I am humbled by the resilience, strength, tenacity, humility, beauty and inspiration that they still carry because it is no easy job to be a recognisable queer and feminine person who is a social figure, particularly in the context of Botswana.

I have observed from afar the response of Batswana to #DriveWithMe, as both Motswa and Chef Gustos affectionately refer to it on their social media platforms where we are connected. Both of them were on Botswana Television’s Flava Dome a few weeks back performing and promoting this “Drive” jam. I must admit I do not have access to Btv, given where I live. However, Chef shared the clip and my oh my, was it lit or was it lit on that studio! The way in which these two artists’ energy is in sync is out of this world. Both of them just seemed to have been possessed by some muso spirit that just transposed them to some other place that no one else could reach.

I am not surprised much that some Batswana are asking and even making statements on Chef Gustos and Motswafere being an ‘item’ or ‘friends with benefits’ or simply f&*#%!g. Some follower of Chef Gustos on social media even asked bluntly: “Monna Chef Gustos, o segaMotswaferekante”, while another called Chef “legare…minora” to denote that he is slicing Motswafere like a sharp razor blade.

I have been pondering on this for some time now. On this myriad of problematic questions and statements made at these two artists. Yes, they are artists, hence we have the jam “Drive with Me” which they equally brought their artistry and craftspersonhood into. However, this for me exposes the problematic thinking that women like myself or persons like Motswafere cannot have male or men friends, pals, buddies, collaborators, business partners or best friends before anyone can jump to what we do with our genitalia and erogenous parts.

There is an obsession with the men who are attracted to women like us regarding whether they are ‘straight’ or not. I have a sister-cousin who works for Coca-Cola in Gaborone based at the Coke HQ at Block 3 who a week ago shared with me that some of her colleagues were asking if my husband is actually straight, given that he has been with me since before my gender affirming surgery to align my sex with my gender. I laughed hard at this question while equally disappointed by it because it spells a misconception about sexual orientation, more so when you throw a body like mine into the mix. The truth is that my husband, Tony, and most of all men I have ever been with are and have been heterosexual (straight in colloquial terms) pre, during and post Ricki’s time in their lives. Tony has been primarily attracted to women all his life, both before my entering his life and in the 5+ years I have been with him for.

If we satisfy the question of my gender, being that I am a woman, albeit being born in a body different to most women, I have always been a woman. Then any man who meets me is attracted to the woman he sees I being. Now when it comes to being sexually intimate with a body like the one I had pre-surgery, it is a matter of that man having to be secure in his own orientation such that being with a body like mine does not affect his orientation but just expands it. I will not pretend that the societal misinterpretation of there being straight or gay or lesbian sex does not hover over these men’s heads because it does, even though there is no straight or gay sex.

One ex of mine once sat on a bed after being intimate with me for the first time and literally cried in tears over the fact that his guy friends were going to say he is now gay for having been with a woman like me. I had to go into counsellor mode as has happened a few times in my dating life. I have had to piece some men together having fallen apart from the internalised homophobia and transphobia that society nails into most men such that they beat themselves up for lusting, dating and loving women like me.

Stop shaming men who love us. Being that I am a woman, any man who is attracted to women and deems himself straight is still straight if he is attracted to and is with girls like me. One’s sexual orientation is not dependent on the partner they are with. It is an identity and a cardinal point to one’s internal desire to be with certain persons of or not of a certain sex and/or gender. For the men I have been with herstorically, I am always their first transwoman experience and often a surprise for them to find out that I was male assigned at birth, given how I express my gender. That is because what attracts them to me is exactly what attracts them to another woman – my mannerisms, my physical presentations, my grooming regime, my sense of style, my intellect, my intricate mix of gentleness and strength of character, my tenderness and the power I wield. Even in being sexually intimate with me, they are being intimate with a woman regardless of what is in between my legs.

The fact is that women come in so many diverse bodies, personas, identities and characters. I just happen to be one of those varied bodies of women that men and other people attracted to us can be with. However, we continue to socially punish men who are attracted to women in all their diversity, including queer and transwomen. If these men do not identify themselves as gay, why do we jump to the conclusion that they are? If women like me are women, then why would a man attracted to a woman like me be gay? Why do we immediately assume that every man next to a queer feminine body or a woman like me is slicing her? Do you know that women like me have straight best friends? Do you know that some of our best friends are straight men we are not shagging? Did you know that sexual orientation is not conferred but innate? Do you know that queer people are also professionals and don’t just have sex with any man that crosses our path?

Why do you think you are more concerned with whether Motswafere and Chef Gustos are sleeping together instead of complimenting the quality of the output of their collaboration? Did you know that Chef Gustos has collaborated with Jordie Golesedi, Girly Waja, Zanele, Thato Jessica and even Amantle? But why do you not ask if he is slicing them too? What is this fetishization and hyper-sexualisation of queer bodies all about? Are your statements deep-seated wishes to have sex with our bodies camouflaged as transphobia and homophobia?

Do you know what Motswafere’s type of man is? Why do you also portray Motswafere as a bystander in all of this where we are being sliced, as if we cannot slice someone too? Are you not seeing how your questions and statements are deep-seated sexism, misogyny and patriarchy that proliferates a picture of men as active agents in sexual relations while women, feminine persons and queer persons are just depicted as passive actors that are done things to and only as receivers?

Why can it not be in your world that Motswafere is slicing Chef Gustos? Is it because in your mind, non-men individuals are only but toys for men’s pleasure? But what is it any business of yours who Motswa or Chef are sleeping with? Being that they are artists, why do your minds glaze over their artistry to think of them as sexual beings? Do you know that men who are attracted to girls like me are still straight? Put on a queer eye in seeking these answers. 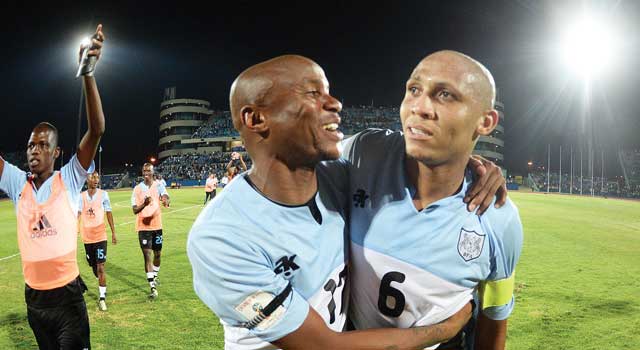