We love to party as much as the next person; any reason will do, for instance even just reaching the end of the week is reason enough to party. Having said that, we do not actually think it works quite the same way when it comes to throwing a party for a client. I mean yes, our clients do like to let their hair down every now and again, but they tend to do it for a reason. Let us take SABMiller’s African brand, Castle Lager securing the sponsorship of premier Spanish football team Barcelona FC. That in its self is reason enough to celebrate, but the significance of the occasion should not be lost in the confetti cannon and sound of Castle Lager bottles clinking in merriment.

Let us step back a moment and think about what is going on here… The main thing to remember is that an iconic African brand, Castle Lager, which already has a significant heritage of supporting sport all over Africa, especially cricket, rugby and soccer, is partnering with an iconic soccer brand, Barcelona. Just how iconic I hear you ask? Try 114 years of heritage and a worldwide following of 44 259 950 Likes on Facebook alone to be exact. Allow me to get ahead of myself a second, just a second – do you as an African realise just how cool it is for Castle fans to sip on an ice cold Castle while watching a great European team wearing one of our home grown brands…? The man reputed to have created this world class beer, Charles Glass, is doing the “twalaza” of victory in his grave as we speak.

Back to African Brands playing with the big boys in their own backyard -this is the real reason for Castle Larger to celebrate, but let us highlight exactly what is being celebrated at this moment. SABMiller, an African company, is a global player in the global alcoholic beverages market; they have brands from nearly every continent on the planet in their product offering. So really they could have chosen any other European brand for the Barcelona sponsorship… except that they did not. They took one of their leading African brands and brought that to the table. I am damn sure many Barcelona supporters, especially ones who have never taken the time to sample an ice cold Castle under our African skies, were like, “What the fudge!? Who or what is Castle Lager?” Well for one, even though Castle’s sponsorship is not as significant as say Qatar Airlines or Nike, it is still a reason to celebrate that an authentically African brand is now actually a world player. For Castle, who have been supporting sport since the 1950’s, this is nothing new; it is more of a continuation of their sport sponsorship heritage. But for the brand as an authentically African icon, it has just demonstrated that not only is it hip to the game regarding big ticket sponsorship, but it also has what it takes to make it happen. That is a reason worth popping (Castle Lager) bottles for.

Of course we as Africans always knew that our brands are ready to go global. I for one was wondering what took so long in the first place. Actually I will tell you of one other African brand that caused quite a stir in the UK’s club scene since the late 90’s. This brand was a traditional sorghum beer called Chibuku, or “Chibuku Shake-Shake” as it was recognised in the UK. Tourism in Malawi and the local arts scene were actually a direct benefactor of the popularity of the night clubs. This occurred when in 2009 the British organisers used their following in the UK to stage their first Lake of the Stars festival in Malawi. From the event in 2011 alone, Malawi was brought to the attention of 200 million people, globally. This continent we call home is turning out to be quite an inspiration for the rest of the world, not just the safest place to invest while international markets calm down. While the world is still processing what African brands are going to do next, we will be popping more bottles. 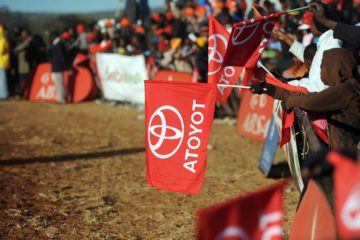