By the end of October last year, the Ministry of Land Management, Water and Sanitation Services (MLWS) through the Public Procurement and Asset Disposal Board (PPADB) awarded a tender for the ‘Design Supply and Build of Water Distribution Network, Sanitation Reticulation, Telementary and Scarca and Other Associated Works in Maun’ to China Jiangsu to the tune of just over P1.5 billion. At the time of the award of the tender, court documents reveal that China Jiangsu was the preferred bidder over Zhengtai Group which had scored lower in financial and technical evaluations and had valued its bid at over P1.8 billion.

It emerges from letters exchanged by China Jiangsu and PPADB (through their attorneys) that while the company was awarded the tender on October 30th, no letter of award or written confirmation of contract of award was availed to China Jiangsu. This prompted the company through its attorneys Montlhe Marumo & Co to write a letter to PPADB copied to the Attorney General (AG), demanding that the company be furnished with a contract to sign so it could commence the works as per the awarded tender.

The company again through its attorneys also sought to have a written undertaking from the procuring entity and the AG within five days, that they will not reverse the decision of the tender award for any unlawful or illegal reason. The letter was written on the 14th of January 2019. On the 21st of January this year, PPADB’s Augustine Tema, signing on behalf of the Executive Chairperson replied to the letter from Montlhe Marumo claiming that the PPADB sat in a board meeting on the 17th of January 2019 where a submission relating to the tender were received from the Ministry.

Tema noted that the contents of the submissions could not be revealed as per Section 91, 92 and 93 of the PPADB Act and Clause 11.25 of the Manual, and that the board was yet to make a decision.

Documents reveal that on the 7th of February of this year, Elijah Motshedi, Acting Executive Chairperson at the PPADB wrote a letter to China Jiangsu Managing Director (MD) Cui Winglin in which he told the MD that the board of directors at PPADB held a meeting on the 7th of February 2019 in which a decision was taken to withdraw the award of the tender to China Jiangsu. No reasons were advanced, the author of the letter said the reasons were classified.

Documents seen by this publication reveal that China Jiangsu has been under surveillance by the Directorate on Intelligence and Security Services (DISS). The evidence shows that the Ministry’s submission consists of a letter dated 30th January 2019 from the Permanent Secretary (PS), Thatayaone Dedede which indicated that pursuant to the Intelligence and Security Services Act, the DIS has been investigating into the activities of China Jiangsu and that intelligence gathered thus far suggests that the company has been involved in conduct that may amount to a threat to national security. No further details were provided. In the letter, the DIS advised the Ministry to terminate all its dealings with China Jiangsu.

In light of PPADB’s decision to withdraw the tender awarded to China Jiangsu on the 7th of February, its attorneys Montlhe Marumo & Co wrote back to PPADB the following day seeking an undertaking by the board to the effect that it will not, pending a review application set out in the firm’s correspondence of 14 January 2019, award the same tender to the second best bidder (Zhengtai Group) or issue an Invitation To Tender (ITT) for the same works or services.

Montlhe Marumo & Co demanded that the undertaking be made on the 11th of February 2019 failing which they shall proceed to the High Court for an urgent interdict to set aside the purported withdrawal of award pending the review proceedings. PPADB delayed its response and only replied on the 15th February 2019 indicating that the PPADB board was not in a position give the undertaking.

On March 26th, 2019, PPADB wrote to China Jiangsu attorneys confirming that at its Board sitting on the 21st of March, a decision was taken to approve the request from the Programme Management Office (PMO) in the Ministry to award the tender to Zhengtai Group Botswana. The award was further published in the Daily Newspaper 5 days later on the 26th March 2019.
In their response PPADB said the award was made in cognisance of the fact that there was no court order or interdict prohibiting the PPADB from awarding the tender to Zhengtai Group.

China Jiangsu as a result approached the High Court for an Order, which was granted on the 28th March 2019 interdicting PPADB. The order stated that pending the hearing of an interim interdict the Ministry will not enter into any contract with Zhengtai Group in respect of the Tender No PR/10/1/13/16 (II) – for the design, supply and build of water distribution network, sanitation reticulation, telementary and SCADA and other associated works in Maun.

Respondents, PPADB as 1st respondent, the Attorney General as the 2nd respondent, the Ministry of Lands as the 3rd respondent and Zhengtai Group as the 4th respondent filed their answering affidavits on the 2nd of April, while the respondent (China Jiangsu) filed its replying affidavit on the 3rd of April. In its answering affidavit, PPADB through lawyers Rantao Attorneys stated that the application is not urgent and that if ultimately it is urgent, the urgency is self-created. The attorneys argued that China Jiangsu has failed (through attorneys) to satisfy the requirements for an interim interdict. They also said the conduct of PPADB was not to deliberately frustrate review proceedings lodged by China Jiangsu and its outcome.

The lawyers claim the decision to award the disputed tender to Zhentai Group was premised on there being no interdict and there was and remains a dire need to progress the project for the benefit of the public. They further argue that China Jiangsu sought and failed on several occasions to get undertakings from PPADB and chose, at its own peril not to file an urgent application for an interdict, and thus should not blame the PPADB for its actions. The AG and The Ministry were represented by S Thapelo Attorneys. They also said the matter was not urgent and that it ought to be dismissed by the court with costs.

China Jiangsu attorneys argued also that Zhengtai Group had, after the tender was awarded to China Jiangsu, appealed the matter and lost as per the Judgement by the Independent Complaints Review Committee of The Republic of Botswana, seen by this publication. On the 16th of November 2018, Zhengtai appealed to the Committee after its initial appeal to the board of PPADB was also dismissed on the 29th October 2018. It complained that ITT procedures were flouted and that China Jiangsu did not meet some of the requirements. China Jiangsu argued that when the Ministry submitted the request for approval of award to the Board, they indicated that they have approved funds of P1, 753,656,945,00 as an amount available for the project. China Jiangsu had tendered at P1 568, 877, 164,38. Zhengtai Group, for who the Ministry wants to be directly awarded the tender submitted a bid with a tender amount of P1, 873, 965, 187,72 which is more than the Ministry’s available funds.

The matter was argued on Tuesday this week in Court before Justice Khan and judgement has been reserved to a date yet to be announced.

The project is estimated to cost over P2.4 billion and it is packaged into four contracts which will be implemented simultaneously. The plan was to have all four contracts completed by August 2021 as they are dependent on each other for beneficial use. It includes the sourcing of the ground water, transfer and distribution within Maun as well as collection of waste water, transmission to waste water treatment plants and reclamation.

Why Truckers Must Keep on Trucking! 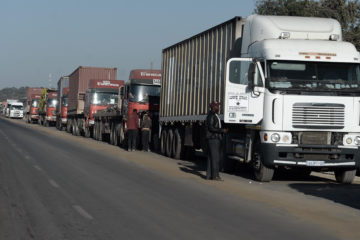